ODMH - Dealing With Emotions After The Storm

Although thunderstorms occur year round, they are most prevalent across the state during the spring and summer months. Thunderstorms can produce damaging winds, deadly lightning, large hail, flash flooding and tornadoes. In addition, effects of extreme heat can be exasperated by power outages caused by these storms. The following severe weather terms are defined by the National Weather Service.

The National Weather Service (NWS) is responsible for issuing severe weather watches, warnings and advisories to alert the public when dangerous weather conditions are expected.

Short Term Forecast - A short-term forecast describes the weather in the local area and includes a short-range forecast (usually not more than six hours). This product will be updated more frequently when it is used during active weather. A short-term forecast is sometimes referred to as a "NOW-cast."

Heat Index (Apparent Temperature) - A measure of human discomfort due to the combination of heat and humidity. It is a more accurate measure than air temperature alone for estimating the risk of heat and its effects on human physiology. Exposure to full sunshine can increase the heat index by 15 degrees. 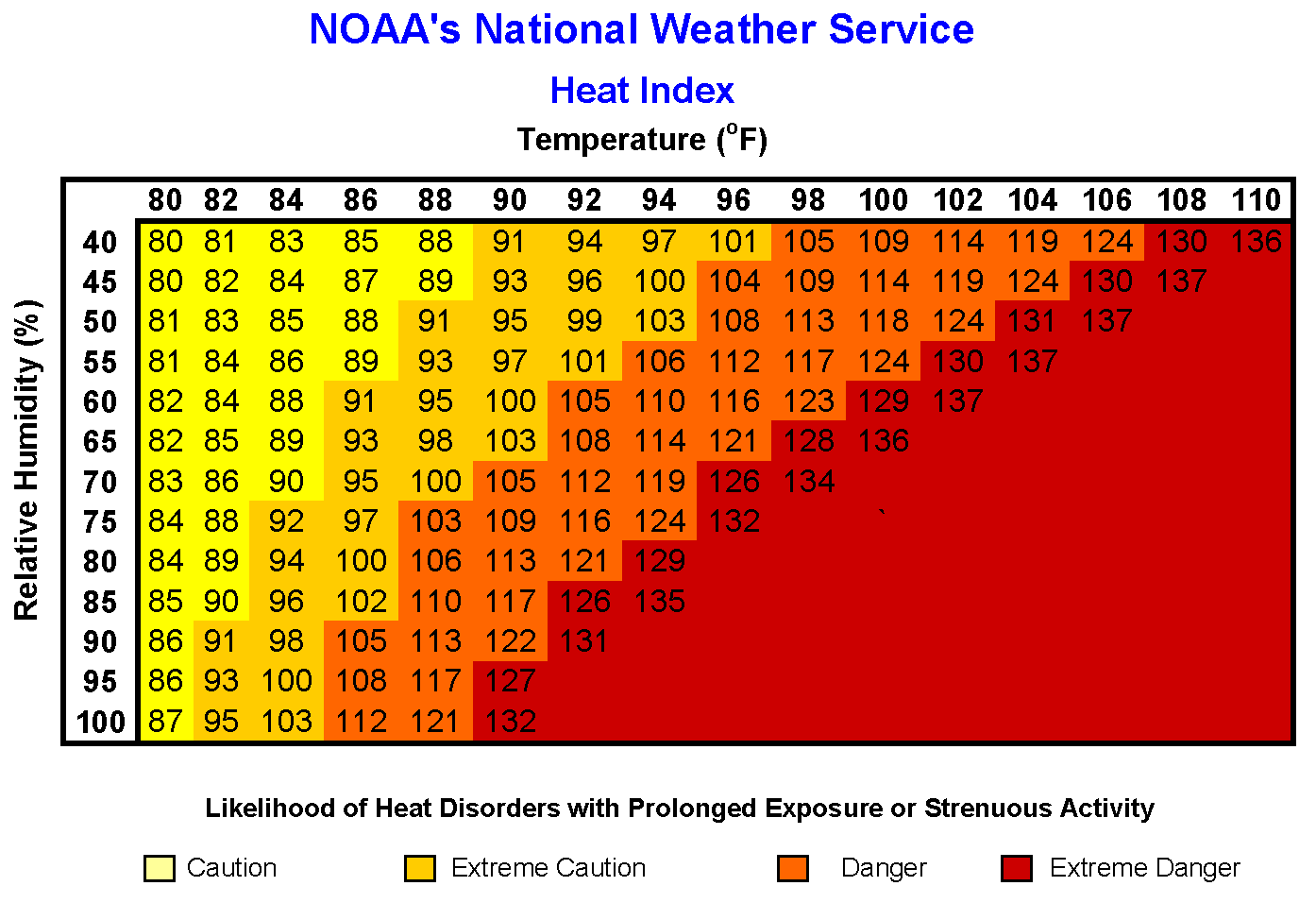 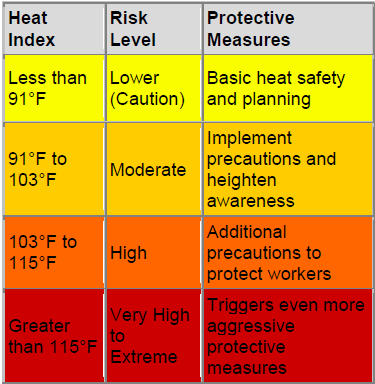 OSHA has divided heat index values into four bands associated with four risk levels. These colored bands differ slightly from those appearing in the NOAA Heat Index chart, which was developed for the public. The NOAA bands have been modified for use at worksites.

Excessive Heat Watch - An excessive heat watch is issued when excessive heat is possible. Heat indexes are forecast at 105 degrees or higher for a period of two hours or more.

Fire Weather Watch - A fire weather watch is issued when there is the possible development of conditions favorable for forest, grass or brush fires and the conditions support extreme fire danger and/or fire behavior.

Severe Thunderstorm Watch - A severe thunderstorm watch outlines an area where hail of 1 inch in diameter or larger, and/or damaging thunderstorm winds are expected to occur. Tornadoes may be possible.

Tornado Watch - A tornado watch outlines an area where conditions are favorable for the development of tornados in and close to the watch area. During the watch, people should review tornado safety rules and be prepared to move a place of safety if threatening weather approaches.

Excessive Heat Warning - An excessive heat warning is issued when heat indexes will generally reach 105 degrees or higher for a period of two hours or more.

Flash Flood Emergency - In exceedingly rare situations, when a severe threat to human life and catastrophic damage from a flash flood is imminent or ongoing, the phrase flash flood emergency may be included in a flash flood warning or statement.
Action: Take action immediately - move to higher ground, do not drive through flooded roadways.

Areal Flood Warning – An areal flood warning may be issued for any high flow, overflow, or inundation in a geographical area which threatens life and property and isn’t appropriately covered by a flash flood warning or flood warning for forecast points.

Flood Statement - A flood statement is issued after a Flood Warning. It will provide the latest information on the flooding situation.

High Wind Warning - A high wind warning is issued when sustained winds (not of thunderstorm origin) are predicted to reach 40 mph or greater for at least one hour, or any gust of wind is expected to be 58 mph or greater.

Special Marine Warning - A product issued for potentially hazardous weather conditions usually of short duration (up to 2 hours) producing sustained marine thunderstorm winds or associated gusts of 34 knots or greater; and/or hail 3/4 inch or more in diameter; and/or waterspouts. It is also used for short duration non-thunderstorm events such as a strong cold front, gravity wave, squall line, etc., lasting less than 2 hours and producing winds or gusts of 34 knots or greater.
Action: Boaters should move to safe harbor.

Red Flag Warning - A red flag warning is issued when favorable conditions exist for forest, grass or brush fires to exhibit extreme fire danger and/or fire behavior. It is a combination of factors consisting of dry fuels, low humidity, and increased winds.

River Flood Warning - A river flood warning is issued for specific communities or points along a river where flooding is imminent or occurring. River flood warnings will provide crest forecasts.
Action: Move to higher ground; do not drive through flooded roadways

Tornado Emergency- An exceedingly rare tornado warning or statement issued when there is a severe threat to human life and catastrophic damage from an imminent or ongoing tornado. This tornado warning is reserved for situations when a reliable source confirms a tornado, or there is clear radar evidence of the existence of a strong, damaging tornado, such as the observation of debris.
Action: Seek shelter immediately, preferably below ground in a substantial building.

Dense Fog Advisory - A dense fog advisory is issued when widespread fog will reduce visibility to one-fourth mile or less.

Heat Advisory - A heat advisory is issued when heat index is expected to reach at least 100°F but less than 105°F.

Urban & Small Stream Flood Advisory - Alerts the public to flooding which is generally only an inconvenience (not life-threatening) to those living in the affected area. It is issued when heavy rain will cause flooding of streets and low-lying places in urban areas. Also used if small rural or urban streams are expected to reach or exceed bank-full. Some damage to homes or roads could occur.

Wind Advisory - A wind advisory is issued when sustained winds are expected to be between 31 and 39 mph for an hour or more, or any instantaneous wind gust between 46 mph and 57 mph is expected.

Cold Air Funnels
A funnel cloud or (rarely) a small, relatively weak tornado that can develop from a small shower or thunderstorm when the air aloft is unusually cold (hence the name). They are much less violent than other types of tornados.

Derecho
A widespread, fast-moving windstorm associated with convection. Derechos are typically produced by a thunderstorm complex, where the thunderstorms become organized on a scale larger than the individual storms and form a convective system. Derechos can produce damaging straight-line winds over areas hundreds of miles long and more than 100 miles across.

Downburst
A strong downdraft current of air from a thunderstorm, often associated with intense thunderstorms. Downbursts may produce damaging winds at the surface.

Flash Flood
A rapid and extreme flow of high water into a normally dry area, or a rapid rise in a stream or creek above a predetermined flood level, beginning in a short period of time from the causative event. Flash floods typically occur as the result of very heavy rainfall in a short period of time over a relatively small area. It may also be caused by a dam break..

Flood
A condition that occurs when water overflows the natural or artificial confines of a stream or body of water, or accumulates by drainage over low lying areas. This flood is any high flow of water, overflow, or inundation by water which causes or threatens damage.

Funnel Cloud
A condensation funnel extending from the base of a towering cumulus cloud associated with a rotating column of air that is not in contact with the ground – and hence, different from a tornado. A condensation funnel is a tornado, not a funnel cloud if
a.) it is in contact with the ground;
b.) a debris cloud or dust whirl is visible beneath it.

Gust Front
The leading edge of gusty surface winds caused by thunderstorms. Sometimes these winds occur with a roll cloud or shelf cloud and can be quite distant from the originating thunderstorm.

Lightning
A visible electrical discharge produced by a thunderstorm. The discharge may occur within or between clouds, between the cloud and air, or between a cloud and the ground.

Severe Thunderstorm
A thunderstorm producing a tornado and/or, damaging winds of 58 mph or higher, and/or hail 1 inch in diameter or larger. Structural wind damage may imply the occurrence of a severe thunderstorm.

Squall Line
A line of active thunderstorms, either continuous or with breaks, including contiguous precipitation areas resulting from the existence of thunderstorms.

Straight-Line Winds
Generally, any wind that is not associated with rotation, used mainly to differentiate them from tornadic winds. See downburst.

Thunderstorm
A local storm produced by a cumulonimbus cloud, and accompanied by thunder and lightning, strong wind gusts, heavy rain and sometimes hail. A cumulonimbus cloud is a cauliflower-shaped cloud that usually has a height taller than or equal to its width.

Tornado
A violently rotating column of air that comes in contact with the ground, usually, descending from the base of a thunderstorm. In Ohio, many tornadoes are obscured by hills, trees or heavy rain.

For a more detailed glossary of weather terms, consult the National Weather Service Glossary, with information on more than 2000 terms, phrases, and abbreviations used by the NWS. http://w1.weather.gov/glossary/